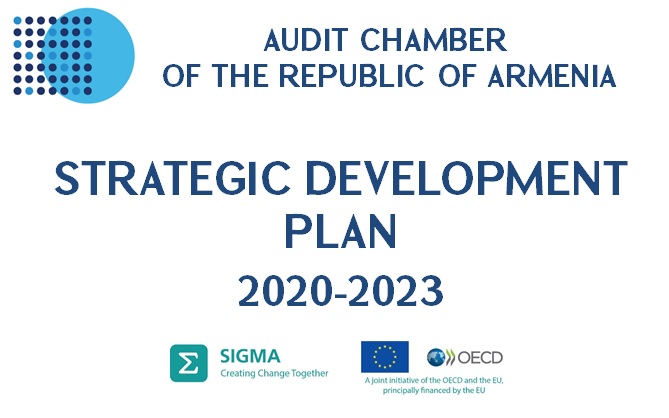 On December 15, 2020, with support of the Audit Chamber and SIGMA Joint Initiative of the EU and the Organisation for Economic Co-operation and Development (OECD), a meeting presentation was given during which invited guests and Audit Chamber’s partners were presented with Audit Chamber’s Strategic Development Plan and the Action Plan for the implementation thereof.

Opening remarks at the meeting were made by Mr. Levon Yolyan, the Chairman of the Audit Chamber, who expressed his readiness to fully support the implementation of the Strategy emphasizing its importance. Mr. Yolyan expressed gratitude to EU-OECD SIGMA’s leaders and specialists for providing effective expert support to the Audit Chamber’s professional team in developing the new strategy.

A detailed presentation of the Audit Chamber’s 2020-2023 Strategic Development Plan and its Action Plan was made in the course of the meeting by Mr. Karen Arustamyan, the acting Member of the Audit Chamber. The presenter also spoke of the new challenges faced by the Audit Chamber pointing out the devices to be used for substantially improving the effectiveness and importance of the audits.

Taking his turn, Mr. Alastair Swarbrick, a team leader of EU-OECD SIGMA, stated that the new strategy of the Audit Chamber is a professional paper and that the latter manifests the actual issues of the external audit system in Armenia as well as the ways of possible solution of those issues.

Mr. Artak Manukyan, the Deputy Chair of the Standing Committee on Financial-Credit and Budgetary Affairs of RA National Assembly, mentioned in his remarks the need of raising the collaboration between the Parliament and the Audit Chamber to a new level. The Deputy informed also of the readiness of the National Assembly to back the Audit Chamber in addressing the challenges faced by it.

The representative of the international donor organizations invited to the meeting spoke specifically of the areas of work where they are going to support the Audit Chamber.